The first service of its kind in Wales, at Velindre Cancer Centre, will relieve the side effects of treating head and neck cancer.
Three hundred people with the cancer are referred to Velindre every year. 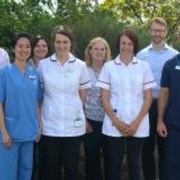 They are treated with radiotherapy and chemotherapy which often leads to pain in the mouth and throat, making swallowing extremely difficult.

Nausea, dehydration, malnutrition and depression are among the other side effects.
Velindre has set up a new service – the Patient Support Unit - to help patients manage the side effects earlier and better by improving their nutrition and fluid intake.
Dr Mererid Evans, the consultant leading the service, said, “Patients with head and neck cancer typically undergo a gruelling six to seven week programme of daily radiotherapy combined with chemotherapy. The side effects can be brutal but, thanks to the generosity of our donors, we are introducing early nursing, dietetic and speech and language therapy support to prevent the worst of them.
“Based on experience of a similar service in Canada, we hope to make a major difference in our patients’ quality of life. We will give people the knowledge and skills to manage some of their own care in the comforts of their own homes. This, in turn, will reduce the need to admit them to Velindre as inpatients.”
Nicholas Frost, one of the first patients to use the service, said that, after his chemotherapy and radiotherapy, “I thought I’d be up and running but this was so hard. I couldn’t eat. I couldn’t drink. I had a burning neck, so many different symptoms.”
He thanked Velindre staff. “They put me on a drip straight away. No going home or going back. It’s all been so easy. All here in one complex.”

The service has been funded by a donation from Andrew Probert, whose wife Jean was treated at Velindre for throat cancer.
Andrew Probert said, “Over many visits to Velindre my wife Jean received the most fantastic treatment from all the dedicated professionals she came in contact with. The extensive and draining procedures, both physically and emotionally, were successful, but unfortunately she died of other medical conditions within months of being announced as clear of throat cancer.

“I and my family spent a considerable time with Jean in the hospital’s various departments. What struck her and us was the fact that we had it relatively easy compared to many of the other patients and their families we came across.

“Our journey time to appointments and in patient visits was no more than twenty minutes. We had our own cars for transport. We were able to prioritise being with her above all other calls on our time including work. We had time to deal with other non-cancer medical problems, we had support from each other and we had no financial worries.

“We made the decision that we wanted to give something back to help those patients and families who don’t have it as easy as we did with the practicalities of dealing with cancer. Jean was a driver in that decision before she succumbed to the other medical conditions. There was of course never any doubt we would carry on with those plans after her death.

“It’s not just the staff who are heroes. It’s the patients and their families as well. They need and deserve as much support as possible. We are privileged to help the Trust in developing that support.”

Steve Ham, chief executive of Velindre University NHS Trust, said, “Thanks to the innovative thinking of my colleagues and the generosity of our donors, this new service will improve the care we offer patients. Our job isn’t just about treatment. We’re here to support every individual as they manage what is often a very challenging time. This service does just that.”

As well as supporting patients being treated with radiotherapy, the service will also support palliative patients.

Two nurses have been recruited to the new service which is being piloted over three years at a cost of £355,000.

Velindre hope to reduce the number of head and neck cancer patient admissions by 20 per cent over three years.